LOMRs represent the bulk of our business.  However, most property owners, land developers, and even engineers don’t know what a LOMR is, much less how to go about performing one.  Therefore, please see our brief tutorial below regarding the basics of LOMRs (click here for a list of Definitions of Commonly Used Terms and Acronyms in the Field of Floodplain Management). 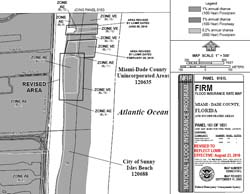 What is a LOMR?

A LOMR (Letter Of Map Revision) is a detailed, technical application that is performed and submitted to the local Floodplain Administrator (FPA) and FEMA for review and approval.  A LOMR changes one or more floodzones, Base Flood Elevations (BFEs), or Wave Crest Elevations (WCEs) on FEMA-issued Flood Insurance Rate Maps (FIRMs).

LOMRs change “V” floodzones to “A” or “X” floodzones, “A” floodzones to “X” floodzones, or reduce BFEs or WCEs.  These changes show reduced risks for flood damage and yield corresponding reductions in flood insurance premiums.  Unfortunately, many effective FIRMs in existence today that determine flood insurance rates contain floodzones that are erroneous or antiquated.  Most Florida FIRMs were originally created using large-scale, county-wide data that did not incorporate fine or “site-specific” data into the modeling and mapping of the corresponding floodzones.  Additionally, many Florida FIRMs are over ten years old, with some over thirty years old.  The floodzones of these FIRMs are no longer accurate due to new construction and changes in land-use, shoreline location, and topography that have occurred since the FIRMs became effective.  A LOMR revises the effective FIRM, changing floodzones and/or BFEs or WCEs, based on more accurate, site-specific data used in the modeling and mapping procedures.  We have found that when a property is located within an inaccurate FIRM, a LOMR can be performed at least 75% of the time.

Why are you paying so much money for Flood Insurance? 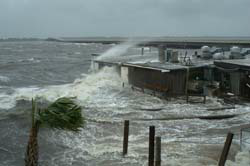 Flood insurance is based chiefly on two criteria – what floodzone your property is located within, and the difference between the BFE/WCE and your structure’s lowest finished floor (in “A” floodzones) or lowest horizontal structural support beam (in “V” floodzones).  Flood insurance  has always been expensive for structures located within “A” and “V” floodzones, but annual rates have increased appreciably since 2008.  These increases were due to an outstanding NFIP debt of several billion dollars, resulting from flood damages/claims caused by several hurricanes since 2004 – chiefly Hurricanes Katrina and Sandy.  Hurricanes Harvey and Irma in 2017 added to this debt, which currently stands at just over $30 billion.

Because this debt has not been reduced over the past few years, flood insurance rates again substantially increased in 2017, and should continue to increase considerably in the near future.  The Biggert-Waters Flood Insurance Reform Act of 2012 was passed into law effective July 2012.  The main effects of this law include a loss of “pre-FIRM” rating status (higher “post-FIRM” rates to apply) to certain properties, a gradual phase-out of properties “grandfathered” into lower risk floodzones, and an increase in the maximum annual flood insurance rate hike from 10% to 18%.  The end result will be steadily increasing flood insurance rates for most policy holders over at least the next several years.

How much money can you save with a LOMR? 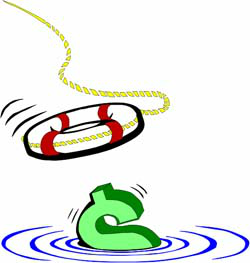 Any property located in an “A” or “V” floodzone would benefit financially from a LOMR.  Below are a few examples:

Who Benefits Most From a LOMR?

The following is a list of the most common properties that benefit most from having a LOMR performed:

By having a LOMR performed, the property owner could achieve the following benefits:

What if a LOMR is not feasible or is not cost-effective? 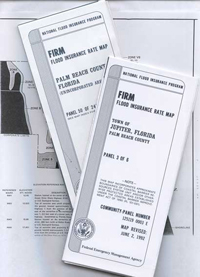 Sometimes LOMRs are simply not feasible or cost-effective to do.  In cases where a property is located within “V” floodzones and cannot have a LOMR performed, a viable alternative is the V-Zone Risk Factor Rating Form.  These Forms are often less technically intensive than LOMRs; hence, they normally cost less than LOMRs to perform.  This Form is submitted to the NFIP to show that the construction standards used to develop the building met or exceeded FEMA requirements.  A V-Zone Risk Factor Rating Form often yields annual flood insurance reductions of 10-40% per structure in a “V” floodzone.

In cases where properties are located within “A” floodzones and cannot have LOMRs performed, a viable alternative is a LOMA or LOMA-F (a LOMA based on Fill used to elevate the structure).  Issued by FEMA, a LOMA removes a structure – not a property – from a SFHA.  LOMAs are often less “technically intensive” than LOMRs; hence, they normally cost less than LOMRs to perform.  LOMAs are only feasible for properties in “A” floodzones and are based on the structure’s most recent Elevation Certificate.  A LOMA will reduce flood insurance premiums by 100% when the policy is discontinued; an approximate 30% reduction would occur for continuing policies.

In all cases, we always perform a cursory LOMR Feasibility Analysis, which is free of charge, in order to determine for sure if a LOMR is feasible; we will NEVER have you sign a contract with us to perform a LOMR unless we are confident we can perform the job accurately and efficiently and get the job approved!